There are quite a few insects that cause damage to your lawn. Learn more about how to identify these pests so you can get rid of them. 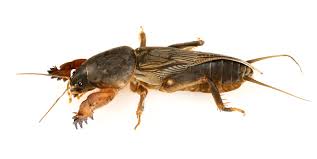 Mole crickets damage turf by feeding on the plant roots, stems, and leaves by tunneling through the soil. Mole cricket feeding is not considered as damaging as their tunneling. Significant feeding injury does occur in pasture and forage systems, but the extensive tunneling is most often associated with mole cricket damage in turf. Mole crickets are the most turf damaging insect in Georgia. Insecticidal control of mole crickets is most effective in summer (late June or early July) when most of the mole cricket eggs have hatched and nymphs are still small. Granular or spray insecticides are the formulations of choice for summer application. In late summer, mole cricket baits or insecticides with longer residual activity will be more effective. Effective control in spring and fall is difficult because of unpredictable weather, cricket activity, and their large dispersal flights. At these times of year, treat only severely damaged areas where grass is dying out. Spot treat with an appropriate insecticide. Bait formulations are most effective in spring and fall.

The southern chinch bug is an insect pest of turfgrass, especially susceptible to St. Augustine grass, in Georgia. Bermudagrass, centipede grass, and zoysia grass are also susceptible to chinch bug damage but past experience proves they are mainly susceptible in St. Augustine lawns. They feed on grass using their piercing and sucking mouthparts. Affected turfgrass can form yellow to brown patches that are sometimes mistaken as indicators of disease or drought stress. Southern chinch bug is a true bug with distinct life stages: egg, five nymphal stages, and adult stage. The southern chinch bug deposits eggs between the leaf blade and the stem of turfgrass in late March to September.  When air temperatures are 83 F, eggs can hatch in nine days. But when air temperatures are cooler, it may take 25 days at 70 F. Needless to say this insect is VERY FAST ACTING and can annihilate an entire lawn in the matter of days. If there is ever suspension of chinch bug activity, act as fast as possible to reduce turf injury. A simple insecticide with the appropriate mode of action will provide adequate control.

The reddish-brown to black adults have a pair of jaws at the tip of a long snout or “bill’. The young are white, legless grubs about 3/8 inch in length with the rear end wider than the head. The “hunting billbug” is the most common type found in Georgia. Adults feed above ground and deposit eggs in the stems of host grasses. Hatching larvae feed within the stems; larger larvae feed on the crown; mature larvae feed on the roots of the turf. One generation occurs annually, but adults and larvae may be found at any time of year. Varieties of turf resistant to billbug damage are available and should be considered when establishing a new lawn in an area with a history of billbug problems. Maintaining constant soil moisture and moderate fertility levels during the fall months into winter helps mask damage by low-moderate infestations. An insecticide application in mid- to late-May and repeated in June can help reduce adult activity. 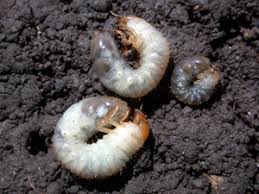 They are whitish with dark areas near the rear. They have a distinct, brown head. The adults are beetles commonly referred to as chafers, May beetles, June beetles, Japanese beetles or green June beetles. Adult female beetles lay their eggs in the soil. The grubs hatch and spend most of their life beneath the soil feeding on underground plant parts. Most have rather long-life cycles; the grub stage can last from several months to two or three years. Most species of grubs found in Georgia have a one-year life cycle. Grub feeding destroys roots, leaving the tops to wither and die. In heavy infestations, roots are pruned off to the extent that turf can be rolled back like a carpet. Symptoms of grub damage include yellowing or browning of the grass and signs of drought stress when moisture levels are good. Grass may feel spongy when infestations are heavy. Summer and early fall is the best time to look for grubs and to apply control measures. During this time of the year, the grubs are small and near the soil surface feeding at the root zone. Preventative action CAN be taken to prevent future damage if grub activity is common in your area. 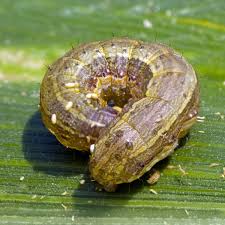 Armyworm caterpillars pupate in the soil. The moths emerge within a couple of weeks. They are active mainly at night. There are three to six generations a year in Georgia. Female moths lay clusters of eggs on grass blades, lawn furniture, white or light-colored walls, and other objects near lawns. Caterpillars hatch and begin to feed on the turf. Damaged turf appears ragged with individual blades showing signs of chewing damage. When numerous, armyworms may devour the grass down to the ground. Young larvae skeletonize grass blades; older larvae feed on entire blades. Populations tend to increase after drought conditions; maintain a consistent soil moisture level to help manage this pest. As with sod webworms, time insecticide applications to control armyworms during the early evening when caterpillars are feeding. Preventative application can be beneficial if army worms have been a problem in the past. 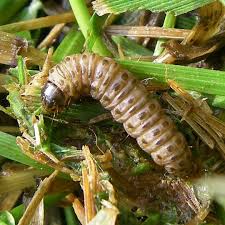 Moths hide in shrubbery or other sheltered spots during the day. They fly over the grass in early evening. The female scatters eggs over the lawn as she flies. Two to three generations occur each year. Sod webworms feed only at night. Damaged grass blades appear notched on sides and are chewed raggedly. Irregular brown spots are the first signs of damage. Large areas of grass may be damaged severely, especially under drought conditions. A heavy infestation can destroy a lawn in only a few days. Damage tends to become visible in mid to late summer and in highly maintained lawns. Sod webworms are partial to newly established lawns.  Insecticide application should be timed for treatment two weeks after peak moth activity and should be made during early evening hours when caterpillars begin feeding. 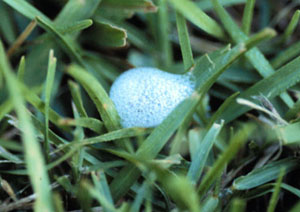 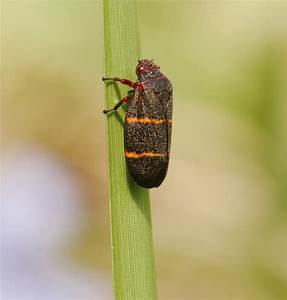 Adult females deposit orange eggs in bits of hollow stems and other debris. Nymphs hatch in about two weeks and begin to feed immediately by sucking juices from the grass. They cover themselves with a frothy mass know as spittle. There may be one or several nymphs in each spittle mass. The masses are found from just below the soil surface to a few inches above it. Two generations occur annually in Georgia. Overwintering eggs hatch in March and April. This generation reaches maturity by June. Adult activity is also noticeable in August and September, when the second generation matures. Spittlebugs are associated with heavy thatch. A heavily infested area will feel “squishy” when you walk across it due to numerous spittle masses. Centipede grass is especially prone to spittlebug infestation; zoysia, bermudagrass, and Bahia grass also are susceptible. Populations often begin and increase in shady areas. The second generation appears to cause more injury. Population damage can be especially high during years with high spring and summer rainfall. Don’t allow a heavy thatch layer to accumulate. Time insecticide treatments in heavily infested areas for July. Mow and irrigate the grass several hours before applying treatment late in the day. 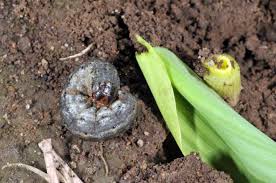 Eggs are laid on grass and weed stems or behind the leaf sheath of such plants. Caterpillars usually remain below the ground surface, under clods, or other shelters during the day; they feed at night. Cutworms pupate in the soil. Three to as many as seven generations occur each year. Cutworms can be active all year. Foliage or stems may be cut off (hence the name cutworm) by the caterpillars. Circular spots of dead grass or sunken spots are indicative of cutworm infestation.  Due to their nocturnal behavior, it is best to time control measures for early evening when caterpillars are feeding. Do not irrigate turf after treatment is applied for control of caterpillars. For these pests, you want the material to remain at the surface rather than have it move down into the soil. 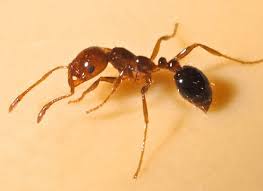 Fire ants commonly infest lawns, school yards, athletic fields, golf courses and parks, where they pose a medical threat to people and animals. Their mounds also detract from the appearance of the landscape and can damage lawn care equipment. Fire Ants typically “mound up” in the fall/cooler months of the season. Here at Roots, we GUARAUNTEE that you will not have a fire ant problem within ONE YEAR of your FIRE ANT PROTECTION APPLICATION. We are so confident in our treatment method, if you notice any activity of FIRE ANTS within the year of your application, we will retreat for FREE. 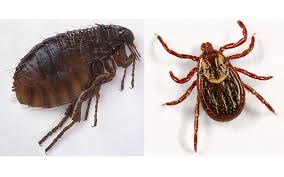 If you’re finding fleas and ticks in your home, it may be time to treat your yard. Pets give free rides to these blood-sucking hitchhikers as they trot in and out of the house. Here’s how to cut down on fleas and ticks in your yard. Fleas like moisture and shade. Keeping your grass and shrubs cut short allows sunlight to light things up and dry them out. Get rid of any clippings, leaves, and straw lying around outside, too. They can hold moisture. Ticks like tall grass and yard waste as well as old furniture and trash in the yard where they can hide. Clear it all out. If your yard backs up to woods, you can discourage ticks from visiting your lawn by placing a 3-foot wide barrier of gravel between the grass and the wooded areas. If you have playground toys or lounge chairs on the lawn, keep them away from trees and the edges of your yard. Here at Roots we have a monthly pest management program GUARANTEED to eliminate all fleas and ticks in/around your lawn and landscape.

Get a Free Estimate